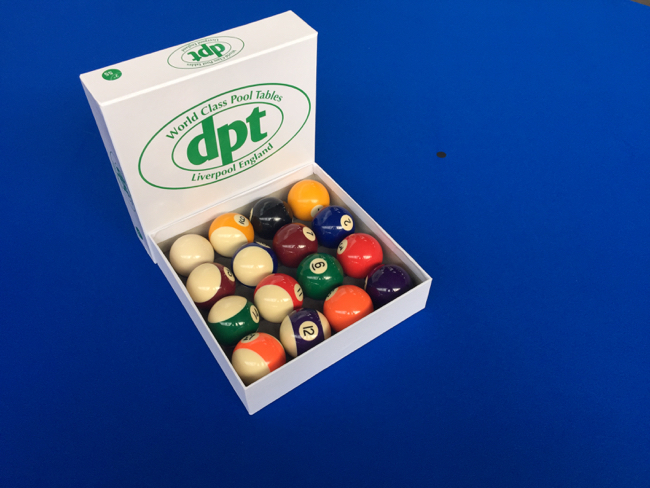 English Pool Tables have fifteen coloured balls used to play pool and are each 2″ in diameter, whilst the white cue ball is 1/8″ smaller than this (the difference in size to allow it to be returned through the mechanism of coin-operated tables if accidentally potted during a frame). When the game was first introduced, the coloured balls tended to comprise a set of seven striped balls and seven spotted balls in addition to the black, but sets of red and yellow balls are now the norm (with other combinations such as blue and yellow also occasionally used).

The balls supplied with pool tables vary considerably in quality and eventually degrade with use. A quick test is to ensure that all the balls in a set are clean and shiny and that they look and feel the same size and weight (although small differences can be difficult to notice until you have played with them for a while). Most venues which hold top-class competitions will keep separate sets of match balls in pristine condition for such occasions, with Aramith considered to be the leading manufacturer of top quality balls. If you own your own table, it is necessary to clean the balls on a regular basis to ensure that they do not become covered in chalk or other dirt which can affect the way that they react with each other and increase the likelihood of so called kicks.